Your brain may be playing tricks with your hearing!

If others have encouraged you to seek help regarding your hearing, listen to them, your brain may be playing tricks on you. A phenomenon known as “auditory adaptation” gives you the impression that your hearing is just fine, when in fact; you may have gradually lost important parts of your hearing.

All of us, at one time or another, have experienced the effects of auditory adaptation. It happened to me when my family moved from one location to another, where noises were slightly different. I discovered that the slightest sounds would wake me, not because they were loud, but because they were different. After a month or so, this no longer was a problem. The reason I was no longer awakened at night was that my brain “adapted” to the new sounds. When this took place, my auditory system recognized these sounds, and I was able to rest without interruption.

Auditory adaptation can also work in the other direction. Many times I ask people if they have worked around noise. Their reply may sound something like this. “Not really. It was noisy when I first began working, but it’s not so bad now.” In reality, the noise levels have not changed. Their brain, over time, adapted to the noise giving the impression that the noise was not as loud as it first appeared.

Auditory adaptation can also trick you into feeling that your hearing has not changed throughout your lifetime. As your hearing gradually declines, your brain and auditory system adapt to these changes and gives you the impression that all is well. When this occurs, it is only natural to accuse others of mumbling, speaking too quickly or blaming the TV stations for putting too much background music in their programs.

What are the ramifications of auditory adaptation?

By far, the most significant impact of auditory adaptation is the effect it has on hearing loss. When a gradual hearing loss takes place over a period of years, auditory adaptation can quite effectively mask the otherwise obvious effects of the impairment. Because of this adaptation, people with hearing loss will tend to minimize their impairment saying, “It’s not that bad”; “I hear the TV just fine, it’s not too loud” or “I hear just fine, you mumble.” What they do not perceive, is the fact that the TV is blasting the rest of us out of the house and everyone else is yelling at them in order to be heard. In some cases, people will deny any impairment at all!

Auditory adaptation is critical when it comes to rehabilitation. I’ve known cases where people used ear plugs after corrective ear surgery because everything “seemed” too loud. After a period of time, when adaptation took place, sounds were perceived as normal and the plugs were no longer necessary. The same phenomenon takes place with hearing aids. Initially sounds “seem” exaggerated and unnatural. If hearing instruments are used consistently and with determination, adaptation will eventually take place and sounds become normal again. With the sophisticated technology that is available, a skilled audiologist will be able to help you make this transition comfortably and given the right attitude, the experience can be quite fun and rewarding.

The bottom line is, if family or loved ones have encouraged you to have your hearing checked, listen to them. Your brain may be playing tricks with your hearing! 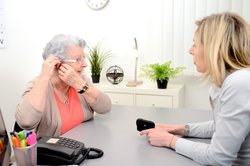 8 Best Hearing Aid Care Practices That You Should Follow

Thank you for subscribing!

You will receive important news and updates from our practice directly to your inbox.